What to do about Stray Dogs? 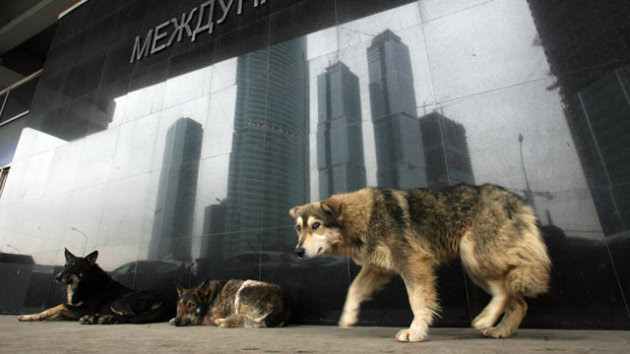 Elise Schlosser of the Animal Geography Specialty Group just sent me a link to an article today about a planned hunt in Moscow of stray dogs.

Like a lot of cities, Moscow has a "problem" with stray dogs, and the solution of at least some of their citizens, with the cooperation of the police, is to set out meat laced with poison to kill the dogs.  Oddly, the police will be on hand to  "prevent cases of cruelty to animals."

Moscow is just the latest city to use lethal methods to handle its stray dog population. Mexico City, Kiev, as well as locations in Albania, Montenegro, Afghanistan, Turkey, Iraq and India are just some of the regions that have recently taken to killing their stray and feral dogs.

While local animal rights activists are, not surprisingly, horrified at the prospect of the killings (which are set to take place tonight), as are dog guardians, the dog hunters justify their actions as a civic duty of sorts.

While there may be some legitimate reasons behind some of the killings--feral dogs are suspected of killing a woman, her baby boy, and two teenagers in Mexico City just last month--in many cases, cities and states simply find that stray dogs are, to paraphrase anthropologist Mary Douglas, "matter out of place." Because dogs must be owned by someone in many countries, then dogs who live on the street are, by definition, a problem, and must be taken care of.

This is a sad, but good example to use to discuss, once again, the social construction of animals and how the categories into which animals are placed--stray, owned, loved, abandoned--shape and determine their treatment.

Posted by Margo DeMello at 5:44 PM