I just came across this photo today of wolf researcher Werner Freund, who raises and observes wolves at a sanctuary called Wolf Park in Merzig, Germany.

While Freund's methods are controversial--in order to assert himself as the dominant member of the pack of wolves (and to protect himself from a wolf who was rushing him), he once kicked a wolf under the jaw--and some other researchers don't believe that his work sheds much light on an understanding of the species, it seems clear that Freund has breached the wolf/human social boundary, much like the way that Timothy Treadwell hoped to do with grizzly bears before he was killed by one in 2003. Freund, who raised his wolves by hand from pups, has clearly been accepted into their pack.

He howls with the wolves, plays with them, and sometimes feeds them raw meat from his mouth. While they may be hand raised, the wolves are not domesticated, so Freund says he has to "be wolf" in order to interact with them.

In some ways, what Freund has done is really just a very extreme version of what many animal lovers want to do: get as close to understanding the inner lives of other animals as possible. 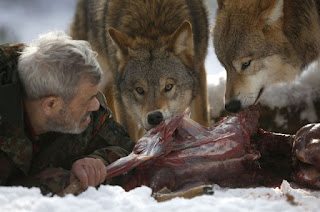 Posted by Margo DeMello at 8:00 PM