A Dog in the Yearbook

Service animals have been getting increasing attention lately; a story went viral last month about a US Airways flight that had to make an emergency landing after a service dog pooped in the aisles (not once, but twice), and the smell apparently sickened a number of passengers.

Recently there have been conflicts and even lawsuits over whether service animals can enter certain businesses; many people feel that there is quite a bit of ambiguity over what the term "service animal" actually means, what functions they serve, and how those animals are trained and identified (and to make it more confusing, the law does not require either the person to carry a certification nor the animal to be identified with a special harness or collar). But in the United States, the law is clear: trained service animals are given legal protections by the Americans with Disabilities Act, which means that businesses and government agencies must provide accomodations for them.

Some agencies go further and embrace these animals and the important work they do.

Taxi, who works with 14-year old Rachel Benke, who has a seizure disorder, accompanies Rachel to all of her classes at Hector Garcia Middle School in San Antonio Texas every day. He's been working with Rachel for the past four years, notifying her when she's about to have a seizure, which has helped to save her life on more than one occasion. 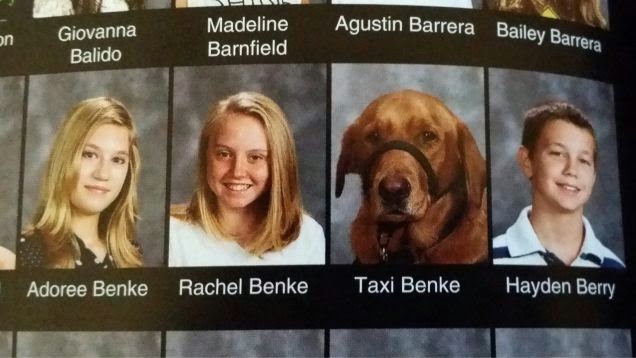 Even though the principal at Rachel's school was originally unhappy about Taxi's presence at the school, today he's such an important part of Rachel's life as well as the school community that he got his own picture in the school yearbook, right next to Rachel's.

Service dogs perform incredibly important services for people with physical and emotional issues, filling a need that it seems that no human or machine can fill. While most are no doubt loved for their work, it is nice to see a highly visible acknowledgement like this once in a while, especially at a time when their status is being debated so publicly.

Not only does Taxi's yearbook picture demonstrate his importance to and participation in the lives of the students and faculty at Hector Garcia Middle School, it also, like the increasing prevalence of pet obituaries in our nation's newspapers, begins to move animals like Taxi every so slightly into the category of person.
Posted by Margo DeMello at 12:38 PM No comments: