My colleague Cheryl Abbate who is a graduate student of philosophy and animal ethics at Marquette University in Wisconsin shared this bizarre news story with me (please click to watch the video).  PETA paid for a somewhat graphic image of a cat undergoing medical experimentation to be posted on buses to raise awareness about Nonhuman Animal testing at the University of Wisconsin, Madison.  In the clip, the news station frames the story as a question of obscene imagery and First Amendment rights.  The newscaster, the bus management, and the public are all presented questioning PETA's legal ability to post the imagery publicly.  Never once is the animal testing actually discussed. 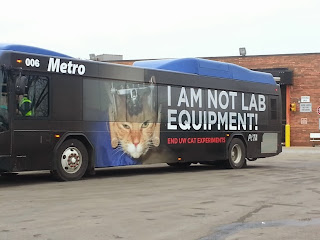 Really, the image isn't even that graphic compared to the scads of absolutely horrific, keep-you-up-at-night, scar-you-for-life, secondary post traumatic stress disorder-inducing imagery that is out there (I just returned from a research trip to the Tom Regan Animal Rights Archive and I'm still trying to recover from the images I saw).  But why has the news story focused only on the First Amendment when the big elephant in the room (or suffering orange cat in this case) is staring us right in the face?

If the viewers relied solely on what the news story presented, they'd never even know there was a problem with the systematic torture and killing of cats in their community.  The university's violence against Nonhuman Animals is completely ignored.  Instead, attention is drawn to the  violence to those humans made uncomfortable by the image or those worried about harm to their business.  An attempt to raise awareness about the interests of the vulnerable has been manipulated as a story about the interests of the privileged.

Research has demonstrated that vegan rhetoric is often distorted by mainstream elite-controlled media to either defame and dismiss veganism, or twist animal-positive ideas to support the status quo.  The media is an agent of socialization created and maintained by those in power.  In this case, the multi-billion dollar science industry and the large university get the privilege to shape reality.  These entities not only hold tremendous sway over the community, but they have also infiltrated the institution of media itself.  As we know, the media is run by powerful white men and their corporate interests.

Indeed, many social movement scholars question the ability for social movements to successfully utilize the media to disseminate messages of radical social change and equality.  On the other hand, the power of morally shocking imagery was also demonstrated.  Many concerned citizens have been contacting the university with complaints.  Fortunately, the news team and others working to maintain the existing power structure can't follow the buses around and try to deflect everyone's attention from Nonhuman Animal rights to First Amendment rights.