Two heartbreaking photos came out this week to remind us of the incredible bonds that form between police officers and the dogs who work with them. While Clinton Sanders has written of the complex and even contradictory relationships that form between police officers and the patrol dogs who work with them--the dogs are "both occupational resources and weapons" but at the same time are members of the officer's household and spend more time with the officer than the officer does with members of his or her own family (Sanders 2012)--it is clear that a very tight bond forms between officer and dog. This is demonstrated in the following two photos. 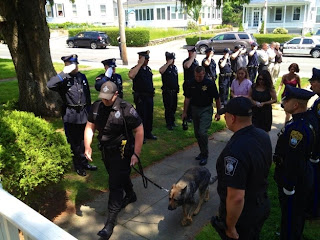 The first is of Kaiser, a police dog in Plymouth, Massachusetts, who is taking his final walk on the police force before his retirement due to kidney disease. Shortly after this photo was taken, Kaiser's partner and caretaker, Officer Jamie Lebretton, made the heart-wrenching decision to put him to sleep. He wrote, "RIP my boy. I could not have asked for a better partner or friend. You made me a better person, a better handler, and a better cop. Till we meet again, Kai. I love you and will miss you daily." 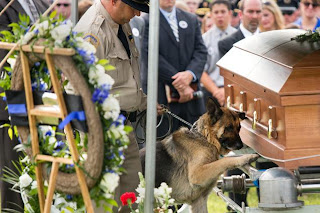 This second photo is of another police dog, Figo, at the funeral of his human partner, Jason Ellis, of the Bardstown, Kentucky Police Department. Officer Ellis was shot and killed in an ambush on a highway interstate five days earlier, with Figo by his side. During the funeral, Figo, who has now been retired to live permanently with Ellis' family, reached out with his paw to touch the casket. Observers have speculated that Figo may have been able to smell that his partner was in the casket and was trying to reach out to him.

Both images are heartbreaking signs of the love and respect between human and dog.
Posted by Margo DeMello at 3:22 PM