The Social Construction of Cockroaches

For many, cockroaches are stereotyped as dirty, file, disease-ridden, and unworthy of life.  Admittedly, even vegans sometimes have difficulty overcoming the "heebie jeebies" cockroaches can sometimes trigger--our socialization against certain animal species is that strong.

In many areas of the world, cockroaches are eaten as food.  Some places (like Russia and Jamaica) even use cockroaches in traditional medicine.  For Westerners, however, cockroaches are considered so vile, they are only worthy of human contact in derogatory "fear factor" contests. In fact, many of us find cockroaches so creepy, they are suitable for Halloween costumes. 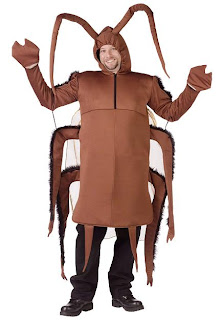 Yet, as Sociological Images points out, "What seems normal is not necessarily  natural or inevitable."  Apparently Americans were not always so disgusted by cockroaches, as evidenced in this advertisement from the 1930s or 40s depicting well-to-do women gleefully participating in a cockroach race. 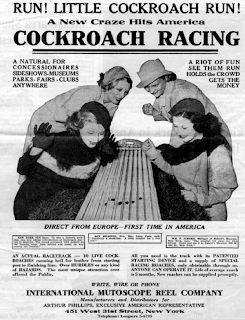 Incidentally, cockroach racing resurfaced in Australia in the 1980s, where it continues today, albeit with the more charismatic hissing cockroach.

According to Cockroach, by Marion Copeland (2003), cockroaches have enjoyed an important role in human folklore, appearing in Aesopian fables and Greek mythology. They become symbols of clever wit, resilience, and survival.   They also represent the dichotomy of light and darkness, as well as power and weakness.

Cockroaches also surface in the story of human slavery and colonization.  For example, most of the species of cockroaches we are familiar with in the United States only arrived to North America with the Spanish colonizers of the 1500s and ships transporting slaves from Africa not long after.  Many oppressed peoples have taken on the cockroach as symbol of the injustice they face.  Alternatively, the cockroach image has also been forced on the vulnerable to dehumanize them and justify their subjugation.