"If She Can't Stay Pregnant, What Else Will She Do?"


This advertisement selling vaccines for dairy cows is a regular smorgasbord of oppression.  The first assumption made is that dairy cows are commodities whose worth is tied to their productivity and usefulness to humans.  If she can't be pregnant, she better be earning her keep serving men in some other way--in this case, it is assisting men in their commodification of other species. 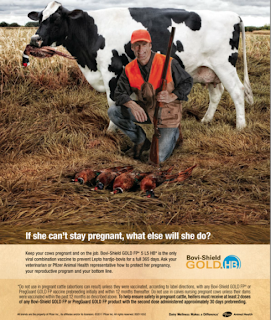 Secondly, the statement, "If she can't stay pregnant, what else will she do?"  pulls on powerful gender stereotypes of women that construct the primary purpose of womanhood as the production of children.  So women (thus animalized) and dairy cows (thus feminized) are made to produce offspring for the benefit of male dominance.  In doing so, both are stripped of their personhood and agency.

The dairy cow is also intended to represent a dog, with the implication being that the purpose of dogs is also to serve human interests.  Furthermore, the plight of the pheasants goes completely ignored.  Five pheasants have been the victim of male violence and their purpose in this advertisement amounts to nothing more than a prop.  Their death goes completely unexamined.

Centered, is a man, the epitome of patriarchal control, surrounded by his conquests and the subservient female, brandishing a gun and a smile of contentment.

This dairy advertisement speaks volumes to the normalized violence inherent to the male relationship to women, Nonhuman Animals, and other vulnerable groups.  There is a sense of entitlement in his wanton destruction of the five birds and the joking exploitation of dogs, cows, and women.  The privilege to manipulate the female body by men for men is made apparent in advertising a vaccine that is intended to prevent the diseases that regularly afflict cows under the routine practice of their exploitation.  If she will not bend to his will, he can force her to.  If her broken body cannot comply, she will simply be put to work elsewhere.

See the work of Carol J. Adams for more on the intersections of speciesism and sexism.