In recent weeks, much of Western Europe has been embroiled in a scandal about horse meat being hidden in, or disguised, as beef, or cow meat. Because the English and Irish (but not the French) feel that eating the meat of cows is acceptable, but eating the meat of horses is not, the British in particular were outraged to find out that they have unwittingly been consuming horse meat, thanks to the fraudulent practices of some food suppliers. 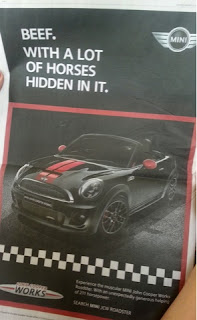 Recently, the makers of the Mini Cooper, the British Motor Corporation, took advantage of the scandal in their latest ad, which reads "Beef. With a lot of horses hidden in it."

The ad plays on the well-used convention by which car companies use the term "horsepower" to refer to how much power a car engine has; the more horse power, the stronger the motor. After all, prior to the development of the automobile, horses were humans' primary mode of transportation. It also plays on the idea of "beefed up," to refer to something that has been made bigger, better or more powerful. Both animal metaphors here are used to show that the new Mini Cooper is more powerful than previous versions.

But they also refer, quite explicitly, to the uncomfortable mixing of horse meat and cow meat in the Englishman's roast beef.

Finally, only one animal is actually explicitly named in the ad, or, for that matter, in any of the coverage related to the scandal. The horse, as an animal, is mentioned both in the ad, and in every single story related to the scandal. But cows, on the other hand, are never mentioned. Instead, beef is the term that is used. Cows are already accepted as meat, while horses are not, so horses can still be referred to in their animal form, while cows have lost that most basic privilege. No wonder there's no outrage.
Posted by Margo DeMello at 1:50 PM