Arrow Pierces Deer's Face and Lives to Tell the Tale: The Importance of Survivor Images

This morning, the story of a young deer in New Jersey who's face was punctured by a hunting arrow went viral.  The story ends happily enough: Through human intervention, he survived and lives to see another day. 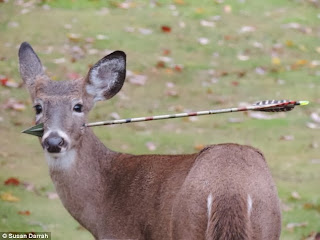 While the news coverage was problematic for many reasons (mockingly nicknaming the deer "Steve Martin" after an arrow through the head gag he popularized, referring to him as "it," celebrating the wildlife department for saving him when the same agency is actually responsible for facilitating "hunts"), the shocking image is powerful enough to transcend speciesist media and offer a glimpse into the real horrors of killing Nonhuman Animals for "sport" and/or "food."

"Hunting" (I place the term in quotation marks to denote it as a euphemism) is like a private club or secret society for men who seek to consolidate their dominance in exclusive yearly meetings made inaccessible to the public.  Men convene in the woods to "bond," "appreciate nature," "get some fresh air," "catch up with friends," "learn life's lessons," etc.  All of these charming sentiments obscure the primary activity that differentiates "hunting" from a camping trip or a hike:  The intended slaughter of deers, bears, and other free-living animals.

Men use the seclusion of the back country to enact patriarchy in these male-only spaces.  The practice is reinforced with highly ritualized behavior.  "Hunters" spend thousands of dollars on licenses, guns, gun accessories, camouflaged dress, lures, etc.  Boys are initiated young and forced (killing is not usually a natural or desirable thing for children) to fire weapons at the Nonhuman Animals they once considered friends.  Killers often end the ritual by consuming the flesh of their victims.

For us advocates (women in particular) who are "uninitiated" in these secret male gatherings, killers assume that we "don't get it" or "don't understand" when we protest the violence.  Like all displays of male power, "hunting" is presumed necessary and any disagreement is thought to indicate ignorance.  This deflection of feminized resistance only reinforces "hunting" (a practice of male supremacy) as for men only and legitimizes male power.

Survivors offer a glimpse into this protected, hidden world.  "Hunting" classes recommend that killers keep their dirty work out of view of the public who would be offended.  Taxidermied corpses portray the animals still alert in life.  But survivors show us the horrors that the patriarchal pro-"hunting" ideology and murder-scene cleanups obscure.


The fact that many National Forest areas and parks practically shut down to the public for men to enter with weapons and inflict genocide on the innocent civilians of the woods demonstrates state-supported male entitlement to feminized spaces.  As eco-feminists explain, Nonhuman Animals and the environment, like women, are treated as resources that exist for men to pleasurably consume.  "Hunting" survivors are not unlike refugees living in farmed animal sanctuaries, rape survivors and slave narratives--they live to tell the tale of male violence.  They make the invisibility of oppression visible again.

See Brian Luke's Brutal:  Manhood and the Exploitation of Animals for more information on masculinity, speciesism, and "hunting."
Posted by Corey Wrenn at 6:55 PM