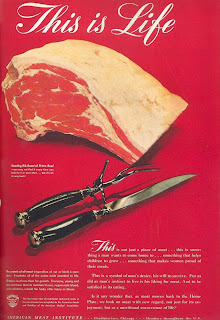 These vintage advertisements for meat all come from the American Meat Institute (via Buzzfeed). The first one is fascinating because of its headline: "This is Life."

Sure, children need amino acids to grow, just as the ad says (that's where the "life" from the ad comes in). But what the ad doesn't say is that children can get same those amino acids from a variety of plant foods, and don't need meat to get them. Meat really isn't life, and to construct it as such is almost Orwellian in its use of doublespeak.

But the ad also has some interesting bits in the small print. Here you can see the clear link, demonstrated by Carol Adams, between meat and masculinity: it's not just "a symbol of man's desire," but when a woman cooks it, she can be proud of her meal. 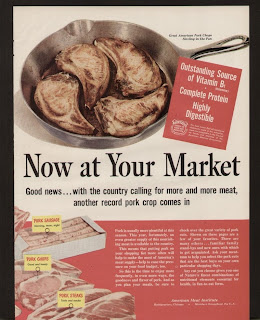 The second ad also does two things. First, it suggests that America is literally "calling for more and more meat," as if the aforementioned American Meat Institute was not itself responsible for encouraging the public to eat meat. The AMI, founded in 1906, is America's oldest trade association, helping America's meat industry sell more meat; in the 1940s, they began advertising directly to the public via the ads that you see on this page. Today they do so via websites like MeatFuelsAmerica.com and MeatMythCrushers.com.

Second, the ad uses the term "crop" to refer to a greater-than-usual supply of pork available that year, as if pork--the flesh of pigs--is cultivated like wheat. While everyone knows that pigs are animals, and not plants, using language like this is a nifty way of covering up the fact that animals do have to be raised, not grown, and killed, before they can end up in the frying pan.

As we've learned from watching Mad Men, the best advertisers know how to use a combination of language and imagery to sell desire, and to encourage the public to buy products that we don't really need. You might even say, as in the case of these meat ads, that advertising sells lies, which the public buys as truth. Meat is Life. Pork is Wheat. No One Dies.
Posted by Margo DeMello at 3:44 PM